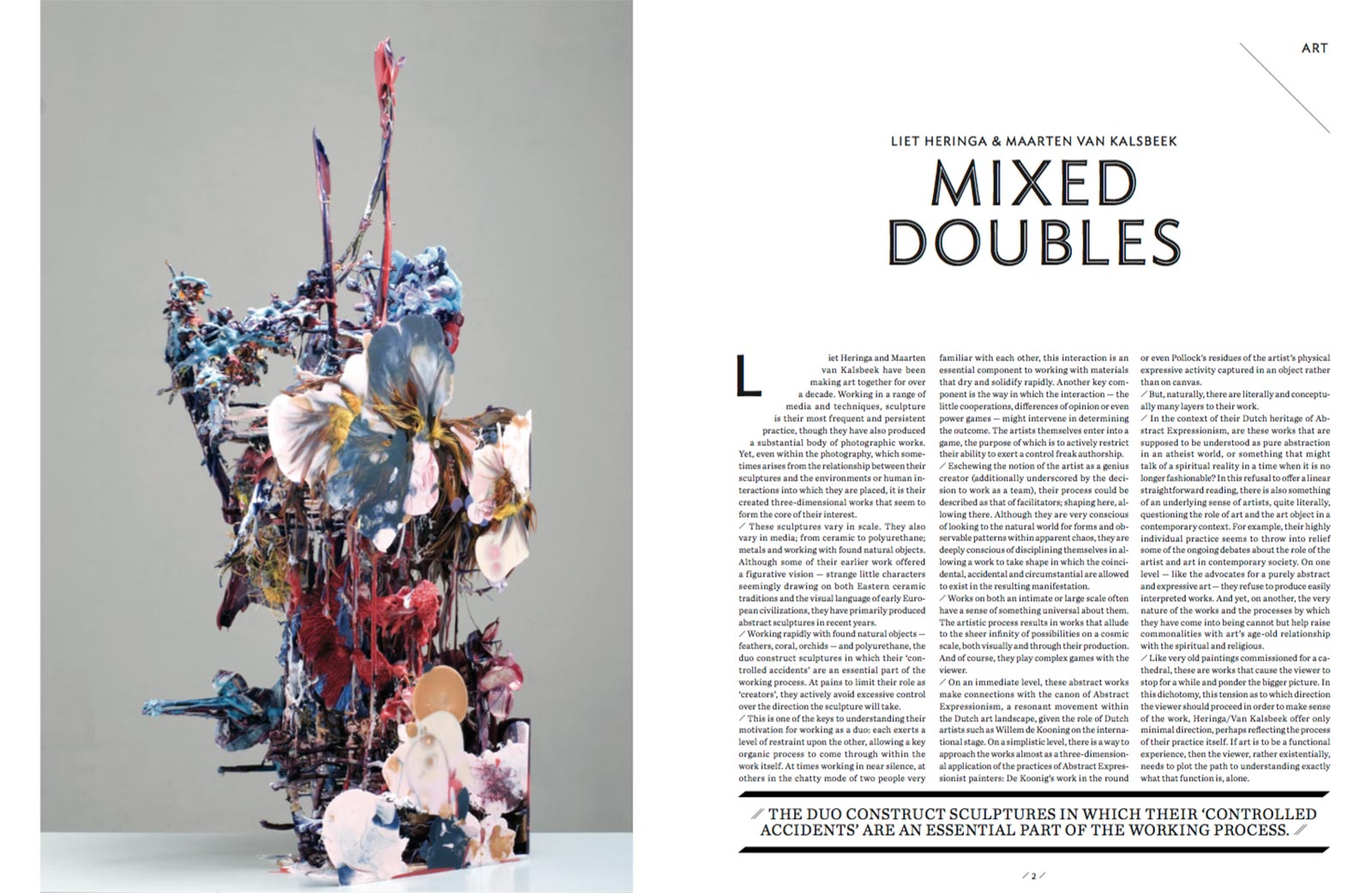 Liet Heringa and Maarten van Kalsbeek have been making art together for over a decade. Working in a range of media and techniques, sculpture is their most frequent and persistent practice, though they have also produced a substantial body of photographic works. Yet, even within the photography, which some- times arises from the relationship between their sculptures and the environments or human in- teractions into which they are placed, it is their created three-dimensional works that seem to form the core of their interest. These sculptures vary in scale. They also vary in media; from ceramic to polyurethane; metals and working with found natural objects. Although some of their earlier work offered a figurative vision — strange little characters seemingly drawing on both Eastern ceramic traditions and the visual language of early Euro- pean civilizations, they have primarily produced abstract sculptures in recent years.
Working rapidly with found natural objects — feathers, coral, orchids — and polyurethane, the duo construct sculptures in which their ‘con- trolled accidents’ are an essential part of the working process. At pains to limit their role as ‘creators’, they actively avoid excessive control over the direction the sculpture will take.

This is one of the keys to understanding their motivation for working as a duo: each exerts a level of restraint upon the other, allowing a key organic process to come through within the work itself. At times working in near silence, at others in the chatty mode of two people very familiar with each other, this interaction is an essential component to working with materials that dry and solidify rapidly. Another key com- ponent is the way in which the interaction — the little cooperations, differences of opinion or even power games — might intervene in determining the outcome. The artists themselves enter into a game, the purpose of which is to actively restrict their ability to exert a control freak authorship.
Eschewing the notion of the artist as a genius creator (additionally underscored by the deci- sion to work as a team), their process could be described as that of facilitators; shaping here, al- lowing there. Although they are very conscious of looking to the natural world for forms and ob- servable patterns within apparent chaos, they are deeply conscious of disciplining themselves in al- lowing a work to take shape in which the coinci- dental, accidental and circumstantial are allowed to exist in the resulting manifestation.
Works on both an intimate or large scale often have a sense of something universal about them. The artistic process results in works that allude to the sheer infinity of possibilities on a cosmic scale, both visually and through their production. And of course, they play complex games with the viewer.

On an immediate level, these abstract works make connections with the canon of Abstract Expressionism, a resonant movement within the Dutch art landscape, given the role of Dutch artists such as Willem de Kooning on the interna- tional stage. On a simplistic level, there is a way to approach the works almost as a three-dimension- al application of the practices of Abstract Expres- sionist painters: De Koonig’s work in the round or even Pollock’s residues of the artist’s physical expressive activity captured in an object rather than on canvas.
But, naturally, there are literally and conceptually many layers to their work.

In the context of their Dutch heritage of Ab- stract Expressionism, are these works that are supposed to be understood as pure abstraction in an atheist world, or something that might talk of a spiritual reality in a time when it is no longer fashionable? In this refusal to offer a linear straightforward reading, there is also something of an underlying sense of artists, quite literally, questioning the role of art and the art object in a contemporary context. For example, their highly individual practice seems to throw into relief some of the ongoing debates about the role of the artist and art in contemporary society. On one level — like the advocates for a purely abstract and expressive art — they refuse to produce easily interpreted works. And yet, on another, the very nature of the works and the processes by which they have come into being cannot but help raise commonalities with art’s age-old relationship with the spiritual and religious.

Like very old paintings commissioned for a ca- thedral, these are works that cause the viewer to stop for a while and ponder the bigger picture. In this dichotomy, this tension as to which direction the viewer should proceed in order to make sense of the work, Heringa/Van Kalsbeek offer only minimal direction, perhaps reflecting the process of their practice itself. If art is to be a functional experience, then the viewer, rather existentially, needs to plot the path to understanding exactly what that function is, alone.

This notion of connecting the work to the tra- dition of religious and spiritual thinking in art is also not as tenuous as it might seem at first. If the connection with Abstract Expressionism is readily accessible, floating on the surface of the work, closer scrutiny reveals other art his- torical connections. Some of the freestanding works meant to be placed on tables or plinths, for example, readily evoke the traditions of Dutch seventeenth century still life paintings. Not only do the objects themselves relate to the tradition — effectively producing a solid, three-dimension- al version of those familiar compositions atop tables usually represented on canvas — but the very materials themselves conjure up those in- credible images of quiet, somehow bristling with the anxieties of an emerging Protestant theology. In one of Heringa/van Kalsbeek’s sculptures we might readily encounter one of those flowers from the tradition of the vanitas; an orchid not represented in paint, but literally engulfed in multi-coloured polyurethane; a piece of coral not used as a means of elaborating the painter’s skill, but instead clad in a rich cobalt blue, ren- dering it into something rich and strange. These sumptuous banquets and elaborate bouquets of the specific genres of Dutch painting were, of course, meant as a metaphoric warning that all this delicate beauty and God’s gracious bounty might come to an end at any moment. And then where would the wicked be?

Enigmatically, Heringa/van Kalsbeek seem to refer as much to atheist questioning driven by the world of science and cosmology as much as to his- torical genres of art bound up with belief and the- ological debate. This is not the art of answers, but the art of questions; not an instruction on how to play the game of life, but an attempt to study any apparent rules without prejudice.
But, quite aside from any theological or philo- sophical content within the referenced traditions of Dutch art history, another important aspect emerges: their relationship with domesticity. It is now readily understood that Dutch cities in the sixteenth century were the birthplaces of modern notions of domesticity and ‘home’, the burghers of Dutch cities being the first to organize their society around smaller family groupings corre- sponding roughly to the contemporary notion of the nuclear family. Part and parcel of this social evolution was what went into people’s homes; the new forms of art and decorative arts respond- ing to these newly developed intimate domestic spaces.
Within the work of Heringa/van Kalsbeek, we often get a lateral whiff of these preoccupations. They have sometimes chosen to exhibit their works in environments other than the estab- lished white cube default. For example, within castles and other heritage sites, richly decorated with furniture and objets d’art accumulated over centuries. Even when showing in institutional spaces, they have opted to break out of the white cube by means of painting the walls a colour other than white. Similarly, their display choices, though not excluding the usual art object plinth, have frequently opted for designs that either refer to domestic furniture or are actually domestic furniture.
And, even within the abstracted work itself, there is sometimes reference to movements in the decorative arts. Perhaps one of the most notable is the way in which they have often worked with the coloured polyurethane to produce rippled patterns on its surface that are highly evocative of certain styles of Art Nouveau or Jugendstil glass and ceramics.

All of this adds up to a situation in which it is hard to deny their engagement with ideas of do- mesticity and, more precisely, to raise questions by fairly subtle means. The visual appearance of an object within a decorated domestic setting is altered compared with its appearance in a clean white gallery environment. So too is its cultural meaning altered. And one can’t but help come to the conclusion that Liet Heringa and Maarten van Kalsbeek initiate a subtle but provocative game. It’s already clear that their chosen working method and artistic stance questions the role and place of the artist in a contemporary world through lateral means. In much the same way, this engagement with the domestic — perhaps referring to other periods in history in which the delineation between the art object and the homely arena of daily life was far more fluid and less codified — prompts us to think about exactly what it is we think that art should do and exactly where we expect to find it. KP

Heringa/van Kalsbeek live and work in Amster- dam. Their solo institutional shows include Stedel- ijk Museum CS, Amsterdam; Nederlandsche Bank, Amsterdam; GEM, The Hague and The Museum of Modern Art Arnhem. The have fulfilled a range of commissions for art in public spaces and partici- pated in over thirty group exhibitions including those at Museum Het Prinsenhof, Delft; Kröller-Müller Museum, Otterlo; The Sainsbury Centre for Visual Arts, Norwich; Stedelijk Museum, Amsterdam and Kunstmuseum Bonn, Bonn.